Back at the beginning of October I shot a pre wedding shoot for Joanna and Robert at Prestonfield House Hotel and just a week later Liv and I had the great pleasure of capturing their wedding.

As you know Prestonfield House Hotel is one of my all time favourite wedding venues. It’s so monumentally beautiful. Of all the venues I have visited in Edinburgh whether professionally or personally, Prestonfield and The Witchery are easily way more beautiful than any other venue. Of course they cost a lot of money to visit but if you come to Edinburgh and you want to check hotels that one can stay at, either Prestonfield or The Witchery must be checked out.

Unfortunately these photos took me quite a long time to edit but Prestonfield makes you want to take a lot of photos. Add that together with a really lovely couple like Robert and Joanna and we walked away with nearly 600 photos which when then edited down to about 320 photos in total.

There were so many things on the day that both Liv and I really loved. Firstly the suite they stayed in. When we photographed Gillian and Dominic’s wedding there in April they stayed in the owners suite which left us with mixed feelings. The bedroom was really beautiful but both the bedroom and the suite were really dark. Joanna and Robert stayed, I believe, in the Ben Franklin suite which was beautifully decorated and had a lot of light, which was perfect for us.

As you scroll through the photos below, various images have comments below them.

Hope you like the photos as much as we do.

I’m absolutely in love with the preparation photos. As mentioned the rooms are beautifully decorated, especially so this suite and there was plenty of natural light. Many of these shots were shot wide open at either f1.2 or f2.8 and I simply love them.

The wedding party itself was quite small but was perfectly sized. With the group being quite small we can interact with a lot more people.

Recently I’ve changed the way I’m editing photos and for experimentation purposes I’m shooting with more grain in certain photos. I really like the above photo as it has a really classic film look.

Weddings in Scotland always have a really chance of being wet. The weather here can be sunny one moment, raining cats and dogs the next, foggy the next and so forth. Thankfully the weather held out literally until Liv and I left so we were able to capture Robert and Joanna on her scooter. Really great fun.

This last photo was captured during the evening (just before we left in fact) when Robert surprised Joanna by playing a classic pop song on his bass guitar. One of the best moments of the day, hilarious but really showed how much Robert loves Joanna. 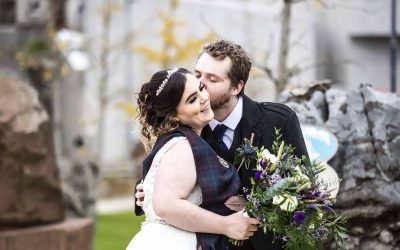 It must be at least five or six years since I last photographed a wedding at Dynamic Earth and it's a shame as it's a really unique venue in a really cool location. Dynamic Earth is a perfect wedding for a less traditional wedding and Nicole and Alex, who hired me to...

END_OF_DOCUMENT_TOKEN_TO_BE_REPLACED 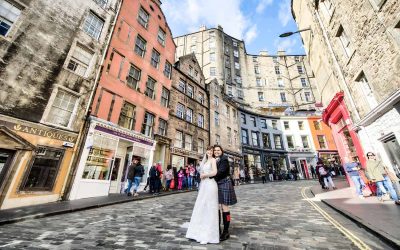 Today's wedding was a really cool one. I love photographing weddings at new venues but it's also great to go to venues I've been to many times before and so for this wedding the new venue was Newbattle Abbey and the old venue is the Apex Grassmarket hotel. According...

END_OF_DOCUMENT_TOKEN_TO_BE_REPLACED 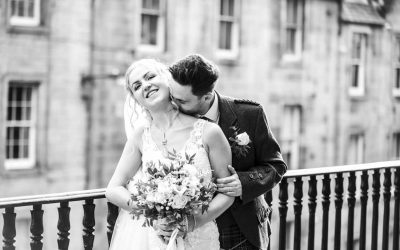 If you scan through this website you'll see that I've photographed quite a lot of weddings at the Rowantree but right next door, and part of the same company, is the Caves. Both venues have a similar look but the Caves is quite a lot bigger and it has much better...