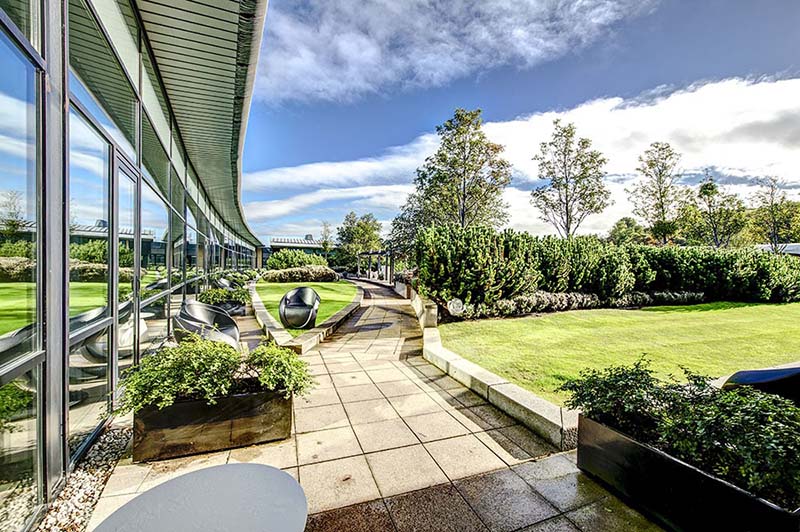 The first time I became of the Glasshouse Hotel was on a day out on Calton Hill. When I moved to Edinburgh I was quite keen to go up Calton Hill so I could check out Rockstar North (makers of Grand Theft Auto) who I’m a fairly big fan of. Just a few doors away and right next door to the Omni Centre I saw the most pretty looking garden on top of a building. Turns out this hotel belongs to a 5-star boutique hotel called the Glasshouse.

If you follow my website you’ll see that I did quite a lot of work for Oyster/Tripadvisor a couple years ago which involved going around many hotels and b&b’s in Edinburgh and Glasgow. I unfortunately didn’t go to the Glasshouse then but for Sean and Janice’s wedding I did. We agreed to take some photos at the hotel simply because of the gardens on top and what an absolutely stunning day we had. The weather was absolutely perfect for photos, sunny but not too sunny, deep blue skies, white clouds, absolutely perfect wedding weather.

As always I encourage couples to improvise a lot. I always give a lot of direction but after a certain amount of posed shots I give couples an idea of what to do but encourage them to improvise, to try to bring out their personalities. Sean and Janice did a really great jump shot at the end of the walking shots and the group shots were really funny as I managed to get them a Charlie’s Angels shot. We also managed a sitting “The Usual Suspects” shot which made everyone laugh.

So that’s it for this really quite short but really good funny wedding. Sean and Janice were a pleasure to work with, the venues were great and the weather absolutely perfect. I just hope I can go back to the Glasshouse Hotel again really soon to shoot some more weddings there.